Do you remember like, a handful of posts ago how I was making fun of the TERRIFYING ads on Facebook? And how they're ridiculous and until they stop being ridiculous I refuse to listen to people who say "advertising on Facebook doesn't work"?

Here's the newest ad in a series of things that make me LOL. 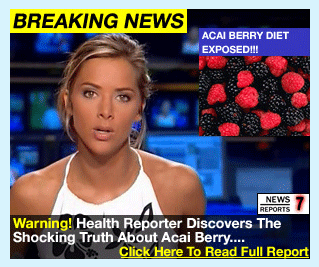 I just barely even know where to begin with this. (Oh, but let me try.)

We are supposed to believe this is a real News Report?  Ahahahahahahaa.

Those TVs in the background look less like a newsroom set-up and more like maybe this photo was taken at a Best Buy.

Also? This is a hard-hitting piece of journalism about...berries? BERRIES HAVE BEEN EXPOSED! With all the flashing colors and exclamation points you'd think that someone had found a sex tape of the raspberries doing unspeakable things. Or like, maybe the blackberries had sent some unbecoming texts to a Hooters waitress or something.

Oh, and speaking of Hooters waitresses. Exactly who -- or what -- are we supposed to think this "news reporter" is? When was the last time you saw a journalist on-air in a tank top? But even if we could get past her ridiculous outfit and spray-on tan and hair that, I guess, is supposed to look "professional"...