The Power Of Tiaras

If you're not following me on Twitter or friends with me on Facebook (and you know? I would totally understand if you weren't!), then I have probably seemed a little...absent? Quiet?  BORING?

It's just that since I joined up with the Clever Girls Collective a couple weeks ago, I will admit that my day-to-day life kind of went nutso. It's been great, but going from "not working" to "working" -- even just at home, even just part-time -- has required a new kind of juggling act I am only just beginning to figure out.

I've worked from home before, sure. I know how to make it work when I'm my only distraction. But, for example, I have never been on an important conference call before where I had to mute myself so I could change a poopy diaper. True story.

Meaning I've quickly learned how easy it is to feel entirely inept at being a parent AND at being a professional at the same time.

This weekend was really useful. First, I got to spend a whole 24+ hours "retreating" with the other Clever Girls, getting focus and clarity around what the next several months will look like for us.

[And, by the way? Stefania, Cat and Sheila are amazing.]

[Also: At my request, The Napa Valley Marriott sponsored and took great care of us. They were fantastic, which is why I approached them in the first place, and if you are ever looking for a non-gagillion dollars a night place to spend a night or two in Napa, I can't recommend them more highly.]


Then I got to blow off some steam.

While I was sequestered, Ben and Emily had decided to come up to Napa and spend the night on Saturday.  So by the time I got home to greet them, I was a bit dizzy-headed, sleep-deprived and unshowered.

Around 10 p.m. -- while laughing at my ridiculous hormone hair -- Ben joked that he was disappointed I hadn't gotten "spruced up" for him. Fueled by a few beers, I took this as a dare and disappeared upstairs.

I returned wearing the "spruciest" things I own: namely, a bridesmaid's dress and tiara. 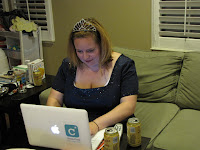 Then we got Emily dressed up in a tutu and Dolly Parton wig that had her looking a lot less like a country singer and a lot more like Dee Snider.

Then we danced around and somehow managed not to wake up either of our babies.

Awesome! Until the weekend ended with my having another gall bladder* attack, taking a Vicodin and passing out cold at 8 p.m.

My weekend. Quite the adventure.

The point of all of this is to say that I think after a crazy few weeks and an intense weekend, I'm getting a grip on my life, schedule, priorities.

I've discovered (again) how easy it is to let "busy" knock blogging off my radar screen as a priority. But when I lift my head out of the busy for a few minutes, I remember (again) that blogging, writing, is my first love, and that doing something I love is important to maintaining my sanity. And identity.

So while I think I have a better sense of my work/life "schedule," I think I've also figured out a way to make sure blogging is part of that.

Oooh, and I think a blog redesign is coming, too.

But enough about me. How have YOU been? Did I miss anything?

P.S. Promtacular! is clean and working fine, and we're working -- once again -- on fixing it so that the RSS feed includes images.

*Yeah, I'm having gall bladder issues. My dad, mom, and sister have had theirs out, and I probably will, too. That's been adding to all the fun and excitement around here, though, lemme tell ya...
Email Post