I haven't received a purposefully inflammatory comment in a really long time, so I'm a little out of practice. Not that I ever did the "don't take it personally" very well (or, you know, at all), but come on. Seriously?

I really am glad for you in that you are in a happy family situation, but have to say that the last photo (your new house) made me really sad.

It is just so.., well sorta really uncool. It's a natural progression (for some) to leave the city and move to a suburb, but did you have to go with the most boring mid-brow iteration on this theme?

The whole subject of our house-hunting thing has made me slightly uncomfortable for a few reasons. First of all, that Ish and I are managing to buy a place at all in this economy makes us extremely fortunate. Given the economy and how many families are losing their homes, writing about buying a new one seems insensitive.

On the other hand, not writing about it at all seems dishonest.

Secondly, there's the straight-up issue of money. I'd prefer not to touch that subject on my blog with a bazillion-foot pole. I'm far more comfortable discussing religion, politics, race -- anything. And not because I don't think I have the experience or perspective to write about wealth (or lack thereof) competently. Good lord. I have had my share of good times; I have also had my share of living paycheck-to-paycheck, having to figure out what portion of what bills to pay each month, wondering how or if or when I would ever climb out of debt.

But it's hard to discuss moving to a new house without so much as hinting at its relative costs. So I kinda wanted to skirt the whole thing altogether.

But then, maybe that's dumb? I don't know. Whatever. Here is what I have to say in "defense" of our home selection to an anonymous commenter who is purposefully raining on my goddamned parade the day before I move. (And I know, I know. If I didn't want to hear all matters of opinions, I shouldn't broadcast my life on a blog...)

Living in the SF Bay Area, even way up in the North Bay, is fuck-all expensive.

In Napa (much like everywhere in California) you have a few choices of house.

You can buy a home with "interest" (i.e., built before, say, 1997, i.e., not "boring."). In such cases, the home will either be tiny, a complete fixer-upper, weird and cold (think 70s with Swedish updating), or well over a million dollars. Sometimes if you're really lucky? ALL FOUR. (Note: I am not afraid of renovating a home, but I don't think that moving into a home that needs thousands of dollars of repair when I'm almost 6 months pregnant is a very wise decision.)

So what's left? Newer construction. A ton of subdivisions. Homes in the style of Everywhere, USA. Some neighborhoods are as generic as they come, some less so. Some had boring insides, some felt totally soulless.

We spent months tracking every house listed in Napa for under a million dollars. We toured almost 30 of them.

In the end, the one we picked feels happy. It is bright and airy. It has a semi-open floorplan we really liked and wanted -- one with a fantastic great room and that doesn't waste space with a big formal living room we'll never use. I guess it's on a fairly disinteresting street with a very non-particular facade. However, it's in a fantastic location and has an amazing backyard and view.

For what we could afford, this house was by far the best and I absolutely love it, uncool and all.

Oh, and look at that! Now I'm not angry anymore. Yay!

Also, I have an excuse to post some more photos: 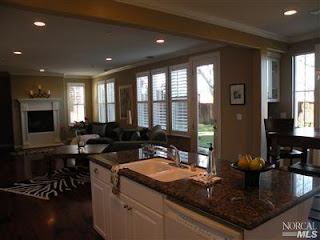 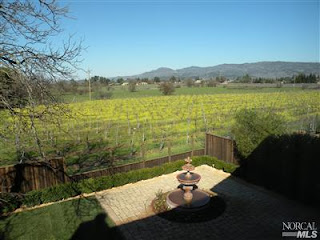 Our backyard (which ends at the fence) and view.
That yellow stuff is a vineyard.

Boring? Mid-brow? Perhaps. But I'm signing up for it anyway.
Email Post