My Job, My Ass, And Mysterious Nylon-Eating Ebola

With drawings! Just scroll down. They are really uh...a sight to behold.

Sometimes I think about event planners -- the kind they show in movies, or the kind I've met in Hollywood. They are always depicted as having huge budgets and an army of helpers waiting for commands. They wear black and have perfect makeup and hair, and wear headsets and use clipboards and BlackBerrys and military lingo, and they give the impression that they aren't the kind of people for whom "relax" means much.

I like to think that it's because my planning requires me to balance 80 billion things simultaneously, in a world where pretty much any plan we have can change on the fly; where I'm essentially reporting to five or six different types of customers who all have entirely different demands all at one time; and where I don't have a headset-clad, BlackBerry-synched army. I tend to believe that SUPER-organized people might have their heads explode were they to try to walk a mile in my shoes.

Which isn't to say I'm not organized. Sure, I am. I'm also just...uh...let's call it "flexible." (Note: Sometimes I think "flexible" might be code for "mad as a hatter" but you know, potato-potahto.)

The point is that I have what I consider to be a good balance of "professional" and "crazy" happening at any given moment during a conference.

So if, by some chance, all the prep-work has paid off and somehow everything stayed on course and the event is going entirely smoothly and I even look sort of put-together in my new outfit and makeup that hasn't yet slipped off my face in a stress-sweat torrent, you'd better believe that something is going wrong under the surface somewhere.

Which was precisely the case at BlogHer Boston this past October.

Knowing I would be returning to the East Coast during the autumn, I bought a new outfit for the occasion. I chose a black sweater and paired it with a long, rust-colored plaid skirt.

I would love to have worn super cute boots with the skirt, but that would require an entirely different blog post about how I apparently have gorilla-sized calves that do not fit into regular knee-high boots. So let's move past that for now. Instead...

I also got a pair of rubber-soled, chunk-heeled, practical shoes because I knew I'd be on my feet, all day, for several days, and that can be very painful. But to make my chunky-shoe situation cuter, I bought a pair of rust-colored tights. (My bare legs in October? Not so cute. And also, what kind of sock would you pair with black chunky shoes and a long skirt anyway?)

On the morning of the event, I got dressed while it was still dark out. I put on my whole New England Autumn get-up, complete with matchy-matchy earrings and bracelet, and strode confidently down to the meeting area. My sister, Healy, was with me, acting as volunteer extraordinaire.

First of all, let me just say that there is something about control-top tights in the right size that makes me stand a little straighter, walk a little taller. I feel more put together because my whole wardrobe is complete, meaning even underneath.

And here is where the drawings come in.

To familiarize yourself with what is about to be a very uncomfortable day for me, here is a drawing of my rear-end.

Consider that the "control" image.

Because here is my butt in brick colored control-top tights:

About 20 minutes into set-up, as I'm hauling out badges and booting up my computer and confirming AV checks and carrying all kinds of boxes and signage around the hotel, I notice that my tights seem a wee bit...breezy?

Breezy like, Hey, is there a draft under here?

So while in the huge closet with all the supplies and boxes, I felt around and, sure enough. I had a bit of a hole. Not a full-sized wind tunnel, but still.

With registration about an hour away from opening, I figured I had three options.

1) Run upstairs to my room and apply copious amounts of hairspray and clear nail polish to the edges of the hole.

2) Run upstairs to my room and remove tights entirely. Replace them with...ohthatsright, I chose NOT to buy a second pair. Or bring any kind of appropriate stand-ins. So I could remove the tights and expose all of the BlogHer conference to my glowing-so-white-they're-blue legs.

Well, come on. It's a stupid hole and what? It's not like I'm not otherwise distracted. I can deal with a hole in the butt.

30 minutes into registration, I'd been seated for quite some time, and had forgotten about my situation. That is, until I adjusted myself by standing up and re-tucking my skirt under me. That is when I noticed that the hole had grown, quietly, of its own volition, while I was doing nothing but SIT.

I have a really big hole in the butt of my tights.

Yeah. And I don't think there's anything I can do about it.

Do you have an extra pair?

No, of course not.

So what are you going to do?

I don't know. But I'll probably end up blogging it.

By the time the programming started and the hotel staff was starting to set up for the mid-morning snack, I was back on my feet. This time, with new determination.

It was obvious the hole was just going to keep growing. It was likewise obvious that I wasn't going to do a damn thing about it and so what? SO WHAT, HOLE?!?! YOU'RE NOT THE BOSS OF ME.

But as the hole inched its way through the "control" top like some bizarre nylon-eating ebola virus, I noticed a few things I hadn't really paid attention to at first.

The part of my butt that was sticking through the hole in the "control" top? It was not on the same surface plane as the rest of my ass. It was a mound of butt-cleavage, protruding like a continent from under my skirt.

And you know? That's no longer just uncomfortable, that's officially on the painful side. By that point, the "windy" factor had gotten way worse, too, and in fact, the part of my butt jutting out like its own country became a noticeably different teperature than the rest of my butt, which remained warm and cozy under the nylon.

The conference was going perfectly smoothly. Everyone was having a great time. I could not let one stupid hole get me down.

Well, and then I had to pee.

I did not do a drawing of me trying to get the tights -- with half an ass -- off of me, because even I have to draw the line (as it were) somewhere. Just know that it was difficult and kind of hurty, and involved a lot of rolling and unrolling of the control top waistband.

Also? The word "futility" is given new meaning when you're trying desperately to hike up near-assless tights over your butt in the name of professionalism.

What is that? Healy asked, leaning over my computer later in the day, during a 10-minute down period.

I didn't want to forget about it. I will eventually blog this.

Are you...is that...are you drawing a picture of your butt?

It's really just an outline.

By the time the cocktail party rolled (ahem) around, my tights had won the Battle for Complete Asslessness. 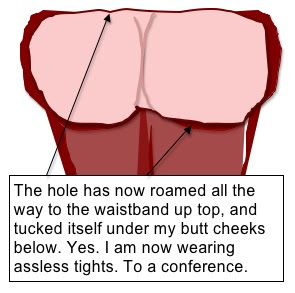 But they had not won the war! Because I still managed to get everything packed up and shipped out AND attend the cocktail party, all without ripping the stupid tights off.

So no. I am not THAT kind of event planner. THAT kind wouldn't have the sort of ass to give her these kinds of problems in the first place, but she would have bought TWO back-up pairs anyway, just in case.

But then SHE wouldn't have anything to post on her blog, and I'm pretty sure that gives me the edge.
Email Post
Labels: I am so professional illustrations times i embarrass myself