I believe I responded about this a long time ago, following a thread on my friend's now-defunct blog, but I was too lazy to go look for it I couldn't find it, so I thought it was worth bringing up again.

I currently live alone, in a small apartment, with two cats.

Now, I do love animals and I did grow up in a household that doubled as a zoo. But we always had dogs as kids, not cats. And when we finally did get a cat, I was already in my late teens. I had formed the "cats have no personality" and "cats are aloof" opinion that most people who have never lived with cats develop. I didn't know.

When my ex and I moved into our first apartment together, it was the first time I'd lived anywhere for any extended period of time and not had a pet. And it was lonely.

My philosophy was to wait until we could afford a house and get a dog.

But he ("he" being my stupid ex) was partial to cats, and I -- having no real objection, though far less enthusiasm -- said okay.

So I researched, found a home-raised litter of non-purebred Russian Blues, and went and got one. One. For our small apartment. The next day, however, we went to work, and I came home at lunch to find him howling and moaning -- he did NOT like being alone. I felt horrible and guilty for having plucked him from his family only to dump him into an empty apartment, so that evening, I did the only sensible thing I could think of: I went and picked up one of his brothers.

That was well over eight years ago, and the two cats continue to be the bane of my existence joys of my life.

I love them. I take care of them. They get the food they like, and treats galore. They have full domain over my entire living quarters. Sherlock knows how to play goalie, how to fetch -- even how to sit. (Don't believe me? See the video.) We all cuddle, we sleep together. I have even managed to find space for THREE litter boxes in my tiny apartment so that they might, possibly, sometime, occasionally ONLY use the litter boxes to pee in. Alas, they do not. But they could, and that is all that matters*.

But this post isn't intended to bitch about how living with two sheddy cats isn't especially fulfilling or pleasant-smelling. Or about how Sherlock beats up his brother every chance he gets, or how Moriarty takes out his fear/aggression by peeing, basically, anywhere he feels like it.

It's about that other side of owning cats. The side that is actually filled with cuteness... 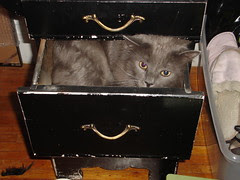 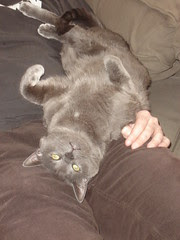 Sherlock camped out in the center of my tutu of his own volition.
...that happens every day you share your life with a cat.

(That is, if you bother to look for it. Sometimes you may forget how adorable your little purr-purrs are when you're stepping in a hairball with your bare feet in the middle of the night because the little darling waited until you were asleep to hock it up, quietly, at the foot of your bed.)

Specifically, I am talking about the strange and almost universal affect that pets -- and cats in particular -- have on us.

The affect that inspires us create and SING SONGS to them. For them. About them.

Bad songs. Ridiculous songs. Songs that make no sense and that the cats (or other pets) pretend they couldn't care LESS about, but which you sing with fervor because you know -- KNOW -- that they secretly love it. Love. It.

I don't actually have a LOT of songs for my cats (erm, though I think when you get to the crazy-cat-woman part of your life where you're qualifying how many songs you sing to your kitties? The point is mostly moot).

Moriarty, for example, only has one song. But before I get to it, I must also point out that most songs don't just come out of nowhere. They seem to come out of the nicknames we first create for our pets.

After we got Sherlock home and then got (Professor) Moriarty, we discovered that "Moriarty" is really hard to say. 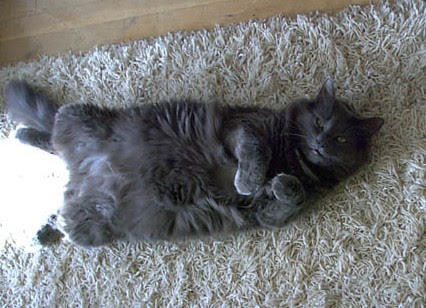 Moriarty is also really hard to move.
So I started calling him Monster, instead. Except when I pronounce it, I am required by single-woman law to use some form of baby-talk, so his name comes out as "Mosser."

And then that often morphs into "Mosser-Butt."

I know. This is what happens when I'm totally honest with you.

So then -- and I'm not sure where or why this occurred to me -- but um. Remember that Simpsons episode where Homer starts driving a plow? And he calls himself Mr. Plow? And then he writes a jingle for himself? Well, he does.

It's very catchy, too. Here's a wav of it if you'd like to listen.

Because I am a creative genius.

But it gets better!

Years and years ago, back during the Ally McBeal days, their wacky law firm had a talent show for Christmas. And Peter McWhatshisbucket, "The Biscuit" character, sang "I Want a Hippopotamus for Christmas." I had never heard that song before (with good reason), but once I did, it got stuck in my head for weeks. This, in turn, resulted in me calling everything "-opotamus," even though that's like the opposite of a nickname. It's awkward to say, it doesn't just roll off the tongue, and it adds FOUR syllables to any other word.

Yet that is how Sherlock became Sherlock-opotamus.

Well, except I do tend to shorten "Sherlock" to "'lock" when I'm being grossly cute. Which means that his name is often, "Lock-o-potamus" and/or MISTER Lockopotamus. Because you know how we crazy-single-cat-ladies are with the formal salutations and all.

(Also sometimes he becomes "Lock-a-les" as in "Hercules" except with "Lock" in place of "Herc." Yeah. I'm so fucking sexy.)

But back to the singing.

You know the theme song to I Dream of Jeannie? Think about it. Get it going in your head.

Now sing with me:

I will admit to being slightly horrified that I have shared this officially with the internet. And yet there it is, in all its ridiculous glory.

NOTE: If I were still totally single I would NOT have posted this. In fact, the ONLY reason I feel okay in doing this is that my boyfriend** ALSO has cats, and he ALSO has songs for them, and if he wants to give me a hard time about this, I will post his songs as well. (We call this "leverage," folks.)

Having shared this, I now turn to you.

Time to tell us your crazy pet-name songs.

Because it can't JUST be me, right?

*I do not actually believe this, not for one second. I am now considering kitty prozac, and I am not kidding. 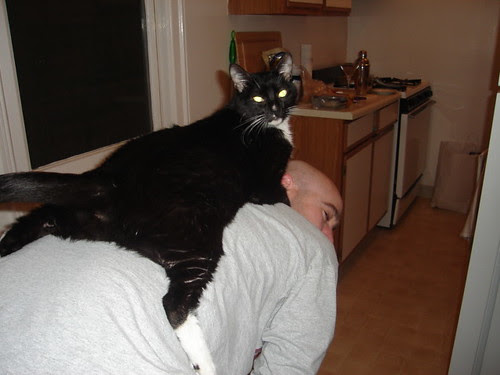 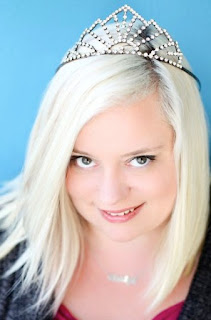